July has gone on record as the hottest month so far; the sun shone and the rain stayed away, even when thunder and lightning were nearby.

So the fields have become brown and dry, with very little grass growth only in the shade is there any green grass. The cows are given a large run of a few fields and have some silage feed on the ground. Half of the herd have been dried up, so are not milking, they are on their rest period before they calve at the end of August.

The lambs have weaned from the ewes as they are at an age where the can eat the grass and do not need their mother’s milk anymore, this gives the mothers a rest period. As it has been said; “there comes a time where little ones must fly the nest”. So following and calling to mother has stopped and all in all it has been very quiet after that initial day!

The children have their school holidays so we have families that come from far and wide. Families from Europe have arrived after a good journey; they say they love the area. We find it very interesting in meeting people from far afield. Driving our country lanes is an experience for them and the peace and quiet at the holiday cottages.

On the farm, we had a crop of wheat which we decided to clamp for extra feed for the winter as this would make a good feed and prospects for a third cut were slim. It is a corn crop that is cut before it is fully ripe and is clamped, just like grass to make silage. There is a lot of forage maize growing in the area and seems to be growing well in the hot weather.

We are ending July on a very dry note, like in May. which is lovely for the beach fans; Lyme Regis being the most popular of the many beaches in this area. 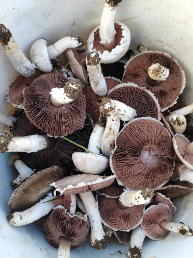